It’s funny to look at. When people post this, we giggle because we know we’ve been there or done this before. However, this kind of stuff actually makes me sad for people who want to lose weight because it tells me that they recognize that they’re fat and just can’t muster the inner strength to do something about it. Posting stuff like this is a cry for help. It’s a person saying, “Look world, I need help to lose weight. Give me something I can follow!” 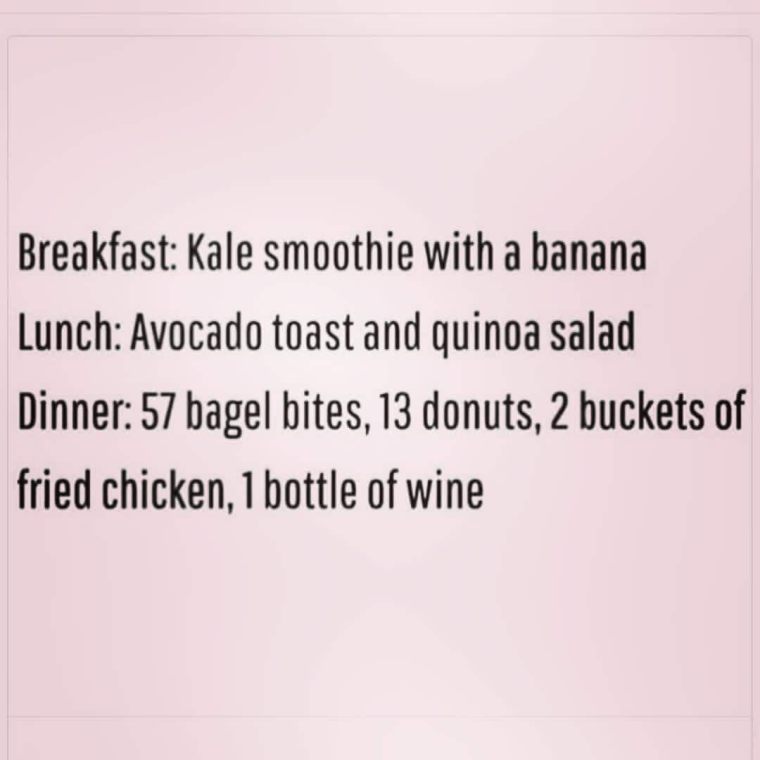 Good news. With some minor mind-hacks, you can do something about it and be able to live with your decisions with little pain.

Did I say no pain? No, I did not. Forgetting about foods and drinks you grew up with is hard to do. We have emotional relationships with our food. Some of our best memories involve food. Think of holidays past, of relatives no longer around, or of friends you partied with. I’ll bet that a lot of the warmest memories center around food or drink. That’s some pretty powerful stuff, right there.

My cousin Andras sent me some cookies this year, but not just any old cookies. He sent me the same cookies my grandmother used to make us every year for Christmas. Now, I’ve been very, very good with eating right, but this package hit me in the gut. Without so much as a second thought, I broke off a piece and had some. The memories that came flooding back to me, especially since it’s not been a year since I lost my grandmother, were strong and warm. I felt the bond with her through this food, and when I closed my eyes to savor this piece, it literally took me back to her town home back in the ’70’s when the family would gather for the holidays. The atmosphere, the joy, and the love all washed over me. I won’t deny that this was a beautiful thing, but this brings me to what really helped to make it special; this was a treat.

Treats aren’t meant to be daily staples of our diet. They are meant to be things we reward ourselves with every now and then. That cookie from Andras was the first cookie I’d had in months, and I have to admit that I didn’t eat an entire cookie. I just had a taste. As much as it was delicious, I felt my grandmother’s gaze watching me, smiling at me for not going nuts with the cookies and eating them all. She always harped on me for my weight; she would be pissed if she saw me sabotage my progress with holiday cookies.

How do I reconcile treats with not sabotaging my progress? Well, I rationalize it ONLY because I realize that in certain situations, or in certain moments, you have to imbibe something that’s off-plan. If you do so in a tiny or minuscule amount and only once in a great while, you will be okay. You will not gain 10 lbs in a day, and you will not fall off the wagon. The key here is to stick to the bite or to the little piece. When I say I broke off a piece of the cookie, I literally mean it was about the size of a quarter. It was a single bite. But within that single bite was enough sweetness and flavor to bring back the warm memories. Christmas was better because I had that one bite. Really.

First, kale smoothie with banana? That sounds pretty terrible to me. That’s why I have bacon and eggs for breakfast, almost without exception. I may make the eggs sunny-side up or scrambled. Sometimes I even make an omelette (or a Hungarian egg omelette known as Lecso which is pronounced as “lecho.”) if I am feeling fancy. Either way, the food I have in the morning is delicious and satisfying. Being satisfied with not only the nutrition but the flavor goes a long way in being able to stick to eating right.

Second, avocado toast and quinoa. Ummm, yuck? I wrote about quinoa, oats, whole wheat, and brown rice before, so that should explain why this is a horrible idea. Also: it just doesn’t sound yummy. Now, I’ve had pseudo-breads made with cashew, and they are actually quite delicious, but I eat those pseudo-breads with delicious things like hamburgers or other delicious meats. Once again, if you don’t eat something that satisfies you both with taste and calories, you’re going to get hungry sooner. With carbs, you will still experience cravings. We want to get away from the cravings; get rid of the quinoa!

Finally, I know that the dinner portion on the image is in jest, but in my own past, I know that this is just a caricature of the truth. I’d eat well all day, being careful and safe, but by the time I got around to eating dinner, I was so unhappy and so hungry and craving bad foods that I shoveled it in like I wasn’t going to see food for a month. It made the empty feeling inside go away, if only for a little bit. Of course, I destroyed all the progress I had made during the day, but by the time I got to dinner, I didn’t care anymore. Being an optimist, I would try again the next day only to derail again the following evening.

I know how insidious it is. I’ve been there. I’ve felt the starving and yearning at dinner time. It’s hard. That’s why I said earlier it’s not easy. But here’s the thing: you have to endure maybe a week (at the most!) of this horribleness before the cravings go away. Then, you’re home free, able to eat a delicious diet of food you already love. Of course, you have to cut some other foods you love too, but you have to decide what’s more important: eating foods you love and cutting those foods out from your diet that are trying to kill you so that  you may get healthy or just not give a crap and eat it all. Personally, I chose the former and not the latter.

I mentioned it before, but I’ll say it again. I did a Whole30 with my wife. This helped to reset our bodies and our minds and allowed us to get on the path to better health. When we completed our Whole30, we continued to eat “on-plan” while we did research to figure out which direction we would go into next. We didn’t want to go back to eating processed foods or carbs, but we wanted a little more variety. We found Paleo and Keto and decided on going with recipes from each. So far, it’s served us well.

The image speaks the truth for a lot of us. That’s why it’s funny. My grandmother Adel used to say, “Within every joke lies the truth.” The truth of the image is we all struggle with making decisions about food that satisfy us versus foods that are good for us. We don’t have to make it an either/or decisions. There are many foods you can eat that you already eat that are good for you.

I gave the example of steak and sweet potatoes in a past post. The food I hear most people say they eat when trying to eat right is grilled chicken breast and rice or chicken and salad. First, throw away the rice. Second, if I had to eat chicken every day for the past four months, I’d have given up already. I don’t wish that hell on anyone. Do you like shrimp? Salmon? Ribs? Brisket? Sausage? Bacon? Steak? Pork loin? Ham? So do I!!! Guess what? You can eat ALL THOSE FOODS and be eating healthy (as long as you make sure you buy those that have no added sugar; you’d be surprised how bacon and sausage has sugar in it).

What does it take to get your mind in the game and start eating properly? Make a decision to start and then act on it. The first thing would be to get rid of foods at home that have sugar in them. There are two ways to do this. The first is to throw it away or give it to someone, and the second is to eat it. We did a combination of the two. Sherry and I set a target start date and ate everything we had on-hand that was going to be off-limits. What was left over when we started was given to our daughter or thrown away. Then, Sherry made a plan for each meal we would have and shopped for them. Once we started, there was no going back.

So, while the image at first glance may appear to be funny, it’s actually quite sad. Don’t give up on yourself, and don’t sell yourself short. Make the decision to start today. It’ll be the best decision you’ve made in a long time.