Skip to content
While I was on Facebook today, I received some questions from my friend Scott Allen. This is the transcript of that conversation. 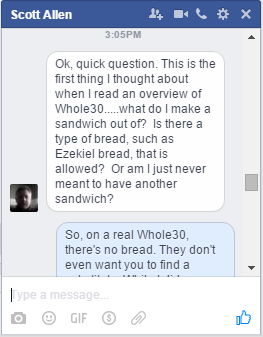 Scott: Ok, quick question. This is the first thing I thought about when I read an overview of Whole30…..what do I make a sandwich out of? Is there a type of bread, such as Ezekiel bread, that is allowed? Or am I just never meant to have another sandwich?
EJ: So, on a real Whole30, there’s no bread. They don’t even want you to find a substitute. While I did my Whole30, my wife and I stayed away from all bread and we ate a lot of casseroles, steak, ribs, sausage, chicken, shrimp, lobster, crab, etc. Now that we’re on Paleo, there are breads that are made without flour, but we have them very rarely. It’s definitely a paradigm shift and a life-changing decision to make, but I can’t argue with the results we’ve had. The good part is that there are a lot of great foods I now eat I wouldn’t have eaten before and would have just had a sandwich instead. smile emoticon
Scott: Damn! No sammiches for 30 days will be tough. Can’t I just hack off a hand or something easier?
EJ: lol! I miss pasta and bread the most…
Scott: Trying to ease my wife into trying it. I could do it but she will have problems. Yep. Those two will give me fits as well.
EJ: My wife said “No way in hell!” when we started and she had to give up milk. About three days in, she finally decided to go all-in and was glad she did. Looking back, we laugh about it, but at the time, it was deadly serious. It’s hard to give up a lifetime of food habits, even if it is to make yourself healthy.
Scott: Yes it is. You seem to really be doing well. Proud of you for manning up Marine.
EJ: Thanks, buddy. It’s been tough from time to time, but every time I see myself in the mirror, THAT is the pay-off and the continued motivation. One of the things to concentrate on is not to find replacements for foods you can’t have, but to find foods that are great in their own right but good for you. So, we don’t eat pasta or bread, but there are more casseroles and other dishes we’ve found that we like just as much, if not more. Because nothing can ever take the place of pasta and bread. lol. Anything that is a replacement tends to pale in comparison.
It’s hard to get one’s head around some of the restrictions of Whole30 in the beginning. I get it; I’ve been there. It’s a lot to give up, but ultimately, my wife and I both got past the initial shock of not being able to eat all the foods we’ve enjoyed our whole lives and could no longer have, and in the process, found a whole world of amazing and delicious foods that are good for our bodies and aren’t killing us while we enjoy them.
Scott’s name and questions/comments used by permission.