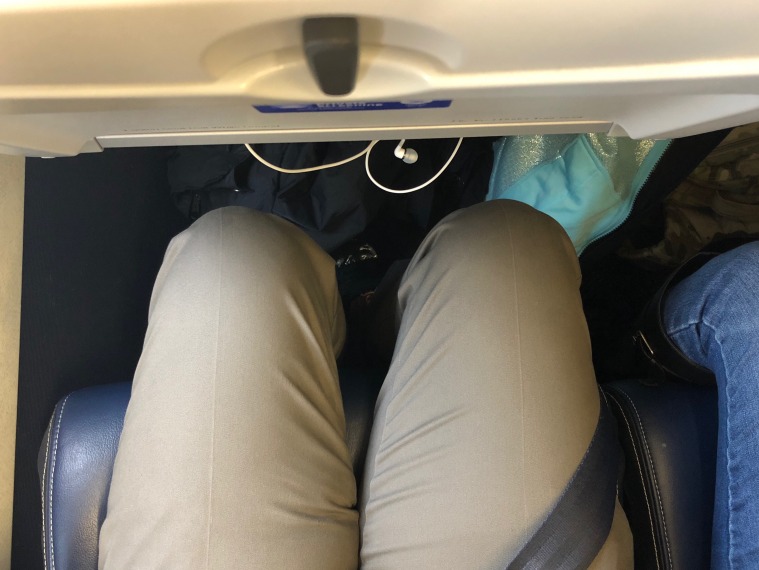 I have written about this in the past, but it never ceases to strike me so profoundly that I’ve lost a lot of weight as it does when I sit into an airline seat in economy class.

Airline seats are roughly 16.5″ to 18″ wide, depending on the airplane type and the airline’s generosity. The photo above is me sitting in an Airbus A319 which is a pretty small and tight airplane. However, whereas in the past I’d have had a lot of squeezing to do to get into that seat, that is no longer the case.

In the second photo which was on our way back to Houston from NYC, I am sitting in a Boeing 737NG, and the seats are a bit wider and allowed me to even stretch out a bit. It was nice.

One thing I have trouble with now, however, is my butt. That’s right, I said it: my butt. Without all the padding there now, I actually feel sore when sitting for too long. I have to keep moving about, putting my weight on different parts of my backside to keep from being in too much pain. The downside of having lost all the weight: I seem to have lost my butt.

I’ll take it, though. Compared to the embarrassment and discomfort that accompanied every airline flight I ever took when I was heavy, a little pain in the butt is a small price to pay for legroom and the ability to pull down the tray table comfortably. Besides, no matter how much my butt hurts, it’s not anywhere near as painful as squeezing into a seat when you’re over 300 lbs.